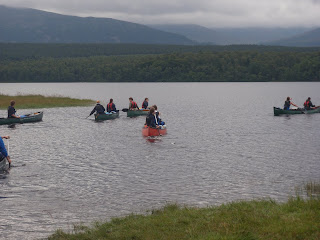 On the 9th July 2011 Safe and Sound Outdoors took a group of Gold Duke of Edinburgh students up to Scotland for their expedition section of their award. 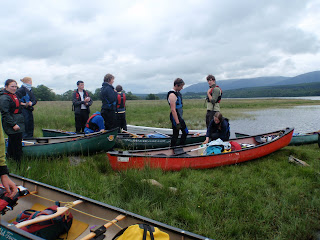 I met the group at Greystoke, Lake District along with Steve(our assessor) and after hitching up the trailer started our long journey north. We were headed for Aviemore in the Cairngorms for the start of our exped. The group were in high spirits in the back of the bus and the journey passed without incident even though it took ages. Scotland is a long way north and Aviemore in particular is at least 8 hours with a trailer.
The group had booked us into Dalraddy Camping and caravan park but when we arrived the lady didn't seem too keen on them staying there. However, with a little persausion we pitched up and settled in for the night. The group started to pack up their kit in preparation for the days ahead. The Gold section of the award states that you have to be on exped for 4 days and 3 nights so we were to paddle from Loch Insh to Spey Bay a total of 120km over 4 days. The forecast for the week was iffy to say the least. 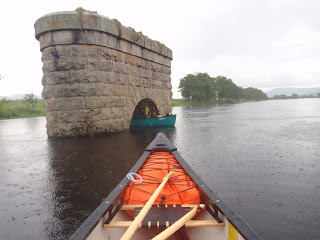 We started early to get on the water for 9.30am. One of the groups wanted to get on for 7.30am but we stopped that silly talk. Loch Insh was still as a millpond which was an omen for later as it turned out. Both groups left at 9.45am and set off for the first camp. The idea was that they would run the river independely from us. We followed at a discreet distance to jst check their progress but not get involved. The day passed without much interest. The Spey is classed as one of the great "classics" of Scottish paddling. The scenery was good if not spectacular. The weather meant it was cloudy for most of the day.
On arrival at camp for the first night proper at boat of balliefurth camping the heavens opened. The river had been running faster than normal but this downpour lasted for approx 12 hours. We had just managed to put up a tarp which proved essential for the evening as the rain didn't let up. I ended up sleeping under the tarp in just me inner tent. "Tent in a tarp".

Before bed we positioned a stick in the river bank to monitor the rise of the river.

The river has risen about 3 foot overnight and was flowing pretty fast. It was decided that the group could continue on their journey but were made aware of the faster current and the need to stay in the middle of the river.
We had Gemma as a driver of the minbus and general shuttle bunny which would prove invaluable.
The second day distance was 29km. We managed to cover the distance in approx 2 1/2 hours and it didnt feel like too much of a push. One rapid just passed Grantown on Spey was exciting but not desperate. The second night camping spot was Ballindalloch Station. This was a site for use by the Speyside Way walkers but regularly used by D of E groups such as ours. Teh group spent the afternoon drying clothes and making progress on their chosen projects. We set up camp on the old station platform which was awesome. 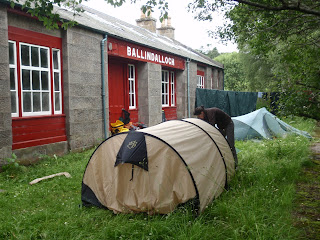 Day Four
No rain or wind greeted us in the morning and it was decided we would run the next section of the river as one large group due the nature of the rapids. The guidebook describes the next section as the interesting bit and with the river running at the level it was we felt it was better to treat this with special attention. "The Washing Machine" was a bit washed out but still managed to fill a couple of boats and would have proved tricky for fully laden boats.
The next 3 miles of river had a number of grade 2 rapids with enough interest to keep the group concentrating. Knackando rapid was the next named rapid on the river and the guide said to approach it through the middle channel. This wasn't possible with the eddying out skills of the group in this water so we ran it river right. This option proved correct and the whole group navigated it fine. After this and down to Carron bridge was a series of grade 2 rapids and all were negotiated perfectly.
There were a great deal of fishermen on the river due to the salmon season but unlike welsh fishermen they all waved and were very pleasant and we in turn stayed out of their way.
We left the group to carry on on their own until the next campsite which was chosen to be at "Boat o Brig" This was going to be a wild camp if we could find somewhere suitable and this being Scotland we had no problem. We ended up camping under a bridge evoking lots of Red Hot Chili Peppers songs etc.

Day Five
The sun was shining finally for the last day of the exped and the group were all "demob happy" and on the river for 8.00am. There was a smell of the sea in the air as soon as we started. The rapids on this section weren't named but some of them still managed to trip up some of the less focused of the group. The aim for today was to get to the sea and finish the trip which both groups did quite ably and some even managed a bit of surf.
The final act was to sort out kit ready for the long drive home. We hadnt even driven 10 miles and 8 out of 11 of the group were asleep in the back of the bus. After a stop in Aviemore for some fish and chips we headed home. The sat nav showed 8 1/2 hours back to greystoke. 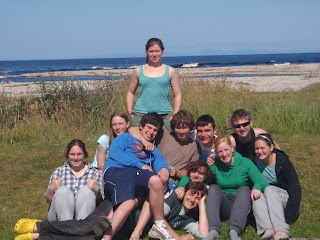 Many thanks to Gemma Lovering of Walford College for being in charge and to all the students for successfully completing their Gold D of E exped section.
Posted by Safe and Sound Outdoors at 04:30