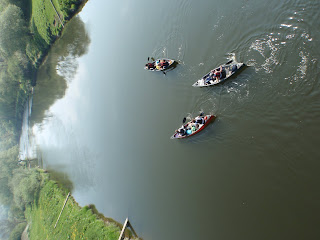 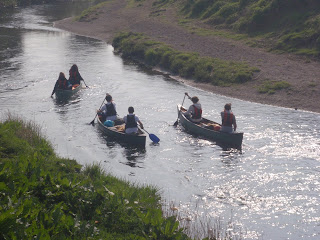 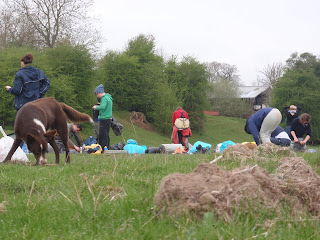 The first day we put the boats in on a section of river that was quite narrow and had many overhanging trees, meaning that if we didn't pay full attention to steering we were run aground or whipped by branches. There was a strong wind which blew the opposite direction and caught our soloer on every meander. Needless to say after soloing the previous three days this wind was tiring Tom out, so we rafted up and continued to make good time, getting out of the water at about three in the afternoon. We learnt that you can't always trust the campsite symbol on the map to be the one you're aiming for, but we found that oppotunism paid off. Tom learnt that not every tree is solid, when he got a wee bit wet trying to get to terra firma. Another thing we found, after a hyperactivce game of spoons, was that in the absence of medication suntan creme cures bee stings.
We woke up at five (or half five) the next morning, and were on the water for 7:15, which got most of the paddling done before the bright sun light burnt us. In Shrewsbury we decided it was polite to get slow moving canoes out of the way for the rowers (and the vicous swans) and we tried a weir. Following the near capsize of out new soloer Beth and the minor injuring of Marcus and Alice, we started to think about whether we would hae attempted such a task on our expedition. The conclusion we reached was that if any member was uneasy about a section we would portage it.
At camp that evening (past two in the afternoon) we weretaught the need for good camp ettiquette, especially when wild camping. The highlight of that afternoon was having warm enough sunshine than we could go swimming, admittedly still in wetsuits and B.As or, in Laura's case, sunbathe for a good three hours.
The final day taught us that hot days do not mean temperate mornings. The frost and freezing mist made sure the members of our team that forgot to bring in their wetsuits would never forget again. Solid wetsuits are not comfortable.
One member of the other team fell ill in the morning reminding us of the need to stay hydrated with clean purified water, so when we found our bottles running low we took the oppotunity to fill up from fresh water tributaries along the way. A while after this Tom got bored of soloing so we put Marcus who is pretty fresh to all paddling in the 14 foot boat. Tom taught him a few skills then we let him go it alone. Despite his evident talent and enthusiasm for this new freedom, we forced him to let Tom solo the rapids, which we all managed in imacculate style (well when style means dry). This means we have four paddlers we know can confidently and capable work alone, so we will be able to rotate at any point to let people relax and maximise our efficiency.
To sum up our trip, we can say our team heads enthusuiastically into the given task, deals with issues calmly and diplomatically and gets immense satisfation from having completed three awesome days on the water!
Posted by Safe and Sound Outdoors at 05:11